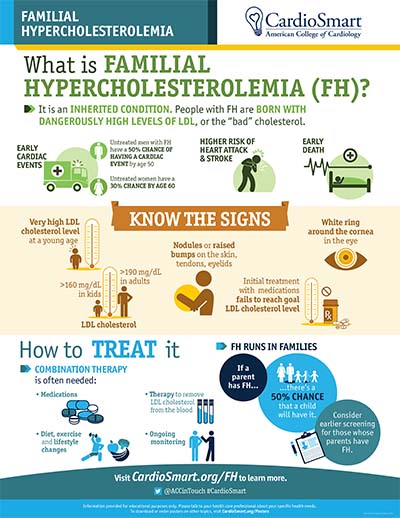 What Increases Your Risk?

Familial hypercholesterolemia, or FH, is passed down in families (genetic). People with FH are at a high risk for developing heart and blood vessel disease, even when they’re very young.

FH happens when there is a change to one of several genes in the body. There are two main types of FH. People who get an FH gene from one parent can have LDL cholesterol levels more than 2 times higher than normal. This is called heterozygous FH.

In rare cases, people can inherit two FH genes, one from each parent. This is called homozygous FH. People with homozygous FH can have LDL cholesterol levels more than 4 times higher than normal. It is harder to treat.

It’s important for FH to be treated in the right way. If it’s not, then people with one FH gene can have a heart attack as early as in their 40s or 50s. Those with two FH genes can experience a heart attack much younger – as young as in their late teens or early 20s.

Anyone can have FH, but it seems to be more common in French Canadians, Ashkenazi Jews, South Africans and Christian Lebanese.