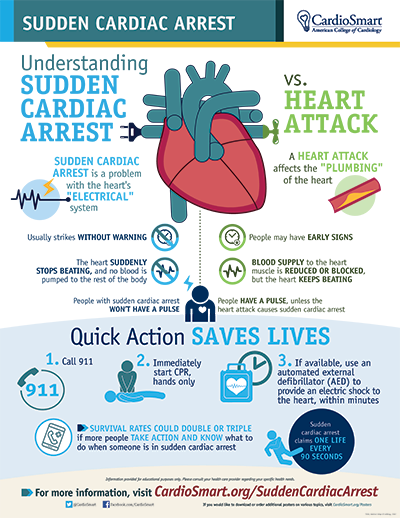 Sudden cardiac arrest (SCA) happens when the heart suddenly stops beating. It happens without warning. Someone may seem fine one minute and collapse the next.

Sudden cardiac arrest is a medical emergency. You should dial 911 and start CPR right away if you suspect SCA in someone.

Without quick action to revive the heart, a person can die in minutes. But delivering an electric shock to restore a normal heartbeat as soon as possible and giving CPR can be lifesaving.

If another person is available, ask him or her to look for an automated external defibrillator (AED). An AED is a portable device that can detect a harmful change in the heart’s rhythm (arrhythmia) and give an electric shock, called defibrillation. AEDs are available in many locations including shopping centers, sports venues, airports, community centers and office buildings.

Giving CPR and using an AED within the first few minutes of SCA can greatly improve the chances of survival.

Read More: Information about how to help

SCA: What it is and isn’t

Sudden cardiac arrest is different from a heart attack.

In some cases, a heart attack might trigger the electrical issues that cause sudden cardiac arrest. But these events don’t need to happen at the same time.

Sudden Cardiac Arrest by the Numbers