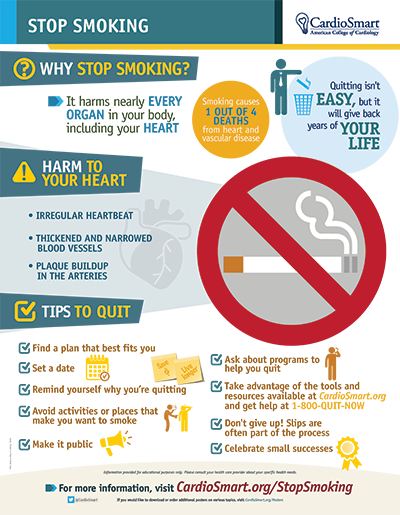 Smoking hurts. Whether you smoke, are exposed to secondhand smoke or are a nonsmoker, it is important to know the dangers of smoking. Smoking cigarettes not only affects the lungs, but it also harms nearly every organ in the body, including the heart.

Smoking is the most preventable cause of early death in the United States.

Even being exposed to secondhand smoke—breathing in smoke-filled air from a nearby smoker—is dangerous. What's more, electronic cigarettes, or e-cigarettes, are often thought to be a safer alternative. But recent data suggest these may not be safe, according to the U.S. Surgeon General.

The good news is that quitting helps—even after years of steady or heavy smoking. When you stop smoking, carbon monoxide levels in your blood return to normal within 12 hours. Within just one year, your added risk for heart disease is cut in half. That's a big deal for your health. Plus you'll avoid breathing in known toxins—carbon monoxide, ammonia, arsenic, and formaldehyde to name a few—that are components of cigarettes!